I’m pleased to announce that Laconics of Liberty is now available as an eBook for the Amazon Kindle.  This is an annotated edition of a collection of liberty-minded quotations, short passages and poems that Charles T. Sprading assembled back in 1913.  The paperback version was published in April.

For the most part the conversion to an eBook was straightforward.  The hardest part was getting the 165 footnotes of the print version to play nicely with the Kindle platform.  As you probably know, the Kindle does not have fixed “pages.”  Everything flows freely, depending on what font size the reader chooses.

The old solution was to turn the footnotes into end notes, link to them from the text, and then have a return link for the end note.  This was not very user-friendly.  The better solution is to have the note popup at the bottom of the page (similar to where footnotes would be in a print version) so they can be easily consulted and dismissed.  That is what I’ve done and I think you’ll like it.  It looks like this: 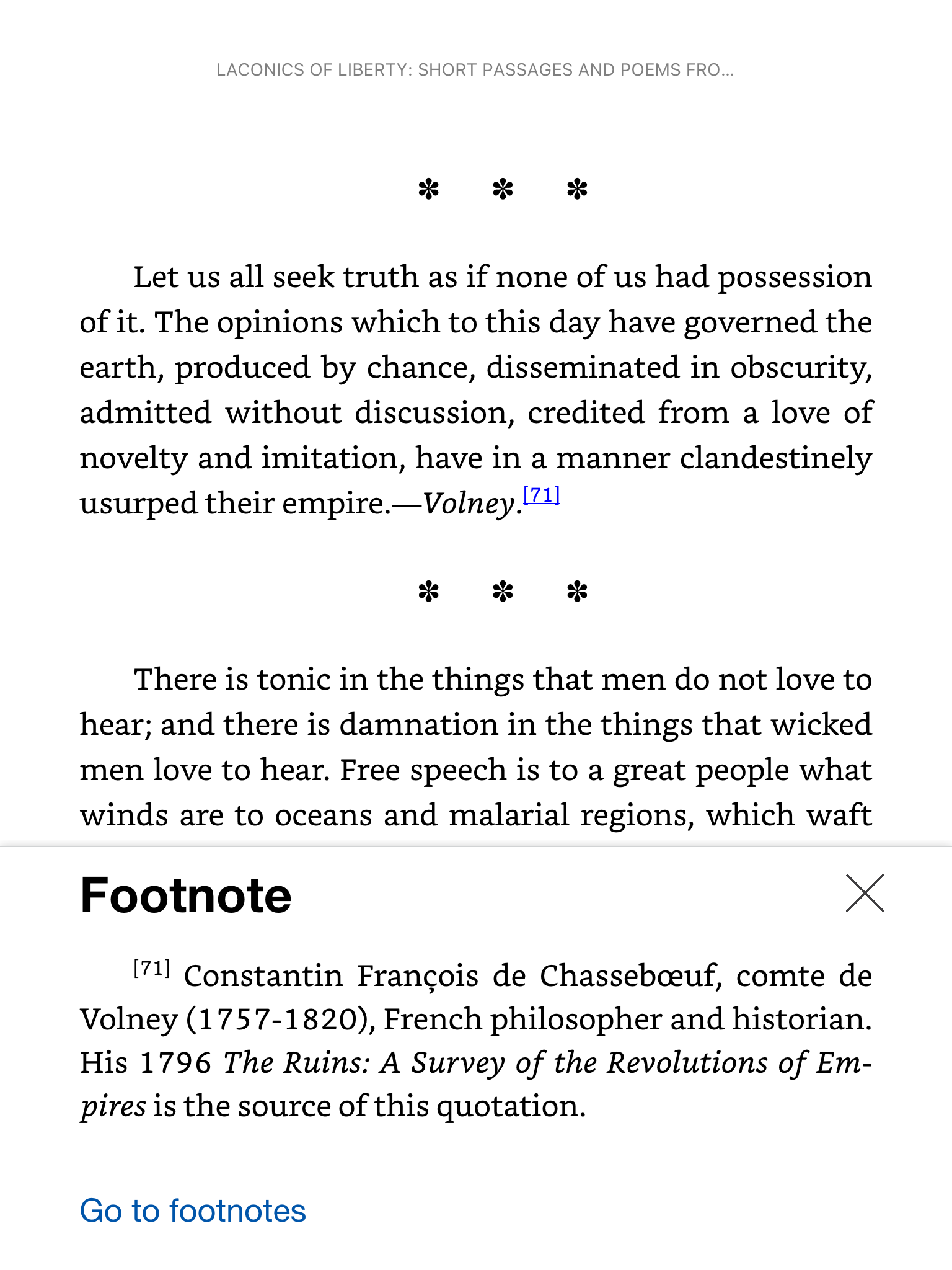 A few words about a little project I’ve been working on lately, which has now come to fruition and yielded a little book.

If you’ve ever looked into the origins of libertarianism you may have come across Charles Sprading’s 1913  Liberty and the Great Libertarians.  This was an anthology of pro-liberty texts, mainly chapter length excerpts from various writers, from various perspectives, e.g.,  labor activists, mutualists, voluntaryists, Georgists, syndicalists, free thinkers, free speech activists, abolitionists, liberals, social reformers, secularists, anti-imperialists, and so on.  By no means would you call this all libertarian by today’s use of the term, but there is a good amount of material here that is exceedingly relevant, and yet nearly forgotten.

Among the multi-page passages, Sprading also included a bunch of short, pithy quotations, from one sentence to a paragraph or two, which he called “Laconics.”   For example:

Make no laws whatever concerning speech, and speech will be free; so soon as you make a declaration on paper that speech shall be free, you will have a hundred lawyers proving that “freedom does not mean abuse, nor liberty license;” and they will define and define freedom out of existence. Let the guarantee of free speech be in every man’s determination to use it, and we shall have no need of paper declarations. On the other hand, so long as the people do not care to exercise their freedom, those who wish to tyrannize will do so; for tyrants are active and ardent, and will devote themselves in the name of any number of gods, religious and otherwise, to put shackles upon sleeping men.—Voltairine De Cleyre

This is good stuff, I think, and worth reintroducing to a modern audience.  To that end, I’ve extracted all the laconics that Sprading collected and lightly annotated them, generally with a brief biographical note.  I also attempted to trace each quotation back to its original source.  For example, for the above, I provided the following footnote:

Voltairine De Cleyre (1866-1912), an American free-thinker and proponent of “anarchism without adjectives.” In 2018 the New York Times published a belated obituary, calling her “America’s Greatest Woman Anarchist.” Her essay, “Anarchism and American Traditions” is the source of the above quotation.

Additionally, I provided a brief foreword to introduce the collection.   It is a brief work, 80 pages in total, and priced accordingly.  If you are interested, it is available now on Amazon and Barnes & Noble.

Habits of idleness and dissipation are seldom avoided in a slaveholding community… Men seldom labor when they can avoid it. Labor becomes dishonorable, because it is the business of a slave, – and when industry is made dishonorable or unfashionable, virtue is attacked in her strongest citadel… Where slavery prevails, the spirit of free inquiry and adventurous enterprise is much repressed.